The Best selling gadget of 2010, Apple iPad has got one serious competitor in India, which is the Infibeam Pi, a product built in India along with a excellent sales price and decent enough features. Amazon – one of the biggest eCommerce website of the United States had first launched the Amazon Kindle, following which the Indian brand Infibeam launched ‘pi’ which is a 180gms eBook Reader, thin and that supports Local Indian Languages.

The Apple iPad has a screen size of 9.7 inches, measured diagonally while the Infibeam Pi is 6″ E Ink® Vizplex which is decent enough only as a eBook Reader, while you cannot use it as a movie viewer like iPad. The weight of the Infibeam Pi is around 180grams for the small device, where as the Apple iPad with a larger screen size and more function weighs around 680grams which is quite bulky and cannot be continuously held with your hands. Apple iPad is 0.5 inches thin with a display technology called IPS (in-plane switching) along with a wide, 178° viewing angle which means that many people can view the display at the same time without much blurry screen, while the Infibeam Pi comes at a Height of 188 mm, Width of 118 mm & Thickness of 9.5 mm. 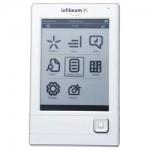 Battery Backup : Infibeam Pi comes with a small screen size, limited functions but along with a huge battery backup which is around 7 days of usage battery life at a 4 hours charging period powered with a Rechargeable built-in Li-Polymer battery (1000 mAh), while the Apple iPad has a larger screen, powered with 25-watt-hour rechargeable lithium-polymer battery which offers you upto just 10 hours of usage backup which you can charge through the Power Adapter or the USB connector. 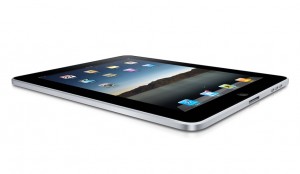 Storage : The Infibeam Pi comes with a 512mb of Internal Storage and a 4GB SD Card which can be connected to store or transfer ebooks or other files from different storage devices, while the Apple iPad comes in different models based on storage capacity & 3G functionality. The most basic version comes with 16Gb Storage Capacity minimum with maximum upto 64Gb version.

Price : The Apple iPad would cost around 35000Rs onwards in India which would include the shipping, customs duty, local sales taxes etc and this is for the basic version of 16Gb storage capacity. While Infibeam Pi comes in just a single version costing 9999Rs which means that you get a decent enough eBook Reader at a price which is almost one fourth of the other gadget and comes with a extra large battery backup and completely free shipping anywhere in India which is another reason why you could buy this reader.

Overall i would recommend Infibeam Pi to everyone who are looking for a eBook Reader which has limited functions, where in you can transfer books through the SD Card and which can be used while you are traveling because it supports upto 7 days of reading along with MP3 playing for entertainment. While if money is not a issue and if you are looking for a bigger iPhone, then we can recommend you to go for the iPad which is backed up with more than 1,50,000 Apps downloadable through the iTunes Store offering you with never expected functions and a classy look.